Ahhh. . . Spring.  A time of new beginnings, of fresh starts.  Who–during the long, dark stretches of winter (a time of inner incubation)–does NOT long for the warm embrace of spring? It’s a time when, finally, we have permission to come alive, and to actively embrace the light.  It’s a time of new hope and of, once again, trusting our instincts.  It’s a time of action, of listening to our guts and following our hearts.

And so, we embrace the triumph of light over dark, as we do every spring.  And, yet, the flavor of the season varies a bit from year to year (much as the taste of wine varies from year to year, depending on that year’s grape).  In astrology, there is a practice for discerning the particular “flavor” that the season will carry, and what themes we might expect to play over time.  This  particular practice is known as casting an Ingress chart–in other words, the chart is cast for the exact moment when the Sun moves (ingresses) from 29 degrees of Pisces to 0 degrees of Aries.  This year, the Sun met the Aries point at exactly 12:57 pm, EST, on March 20, 2014 (last Thursday). 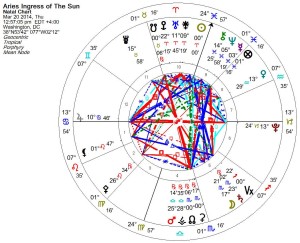 And so, now I’ll interpret some of the energy that I see in the chart for this spring.  (Note: My chart was cast for Washington, DC.–the U.S. capitol–which has a definite effect on the angles of the chart.  You may wish to re-cast the chart for your home town, if you’d like to get a clearer picture of where the angles/house lie for you.)  I’ll also make some comments based on how the energy of this spring chart DIFFERS from chart for this past winter (e.g., based on the Capricorn Ingress chart of 2013).

Despite the fact that we are welcoming the spring, and that the Sun is entering Aries (a fire sign), this chart is heavy on the water element.  We have Cancer rising, with Jupiter in Cancer having just risen over the ascendant.  And so, to determine the ruler of the chart, we look to the moon–which we find in the sign of Scorpio (another water sign–and a tumultuous one, at that), conjunct Saturn in Scorpio.  Add to that the fact that Mercury, Neptune, Chiron and Midheaven are all in water signs, and we have a pretty saturated chart!!

So, what does this mean, exactly? Basically, what this means is that watery matters–such as emotions, family, heartfelt connections, and intuitive development–will be front and center for us this season.  With the moon (chart ruler), in Scorpio, and conjunct Saturn, we’ll be looking to recreate the structures in our lives, and we’ll very attuned to who we can (and can’t) trust in the process.  The moon is in the 5th house (in this DC chart), as well, which indicates a deep need for creative expression–and a desire to speak one’s mind freely.  (And damn the consequences!) Luckily, with Jupiter on the ascendant, and Pisces at the Midheaven, we’re more likely to keep an open mind and heart in the process–and not just “mow down the other” down while sharing our needs and desires.  (Mars conjunct Vesta should help with this too.) And, this is important point, as self-expression is (ideally) not an excuse for acting self-important or disparaging those that we love.  There is an ability, here–an opportunity, in the best of circumstances–to really delve into some deeply therapeutic/creative work and to make a lot of headway this season, as the combination of Scorpio and 5th house energy is capable of deeply transformative creation/self-expression.  Own your voice this season!

Of course, since this is a chart based on the position of the Sun, we want to look and see where, exactly, the Sun is located in the chart–and, where do we find it? At the top of the chart!, in the 10th house (with Juno, Uranus and Eris nearby).  And so, already we see an interesting combination of energies–as, in a chart that is (overly?)-saturated with water, we find still find the Aries Sun at the top of the chart, “calling the shots” (so to speak).  One of the dilemmas that I could see us running into, as the season progresses, is how to balance a fierce drive and determination (Aries Sun in the 10th), spiked with some Uranian vision and individualism, with the brimming awareness of our own emotional reality, and that of those that we love (Cancer rising and a watery house).

This elemental mix is in stark contrast to the winter chart, which was heavy on both fire and earth in the elemental mix (Aries rising, and the Capricorn Sun at the top of the chart, along with Sagittarian Mercury and Capricornian Pluto).  And think about it–though this past winter WAS a reflective season (as all winters are), there was a lot of movement going on: a lot of negotiating and re-negotiating (Mars in Libra, ruler, on the descendant) and a lot of drawing up business plans, and sometimes re-drawing them (Capricorn Sun and Midheaven, with the Plutonian influence).  And so, we were always beginning again, but we had that spark of ingenuity (Uranus in Aries in the 1st) that kept moving us forward.

This season will be different. . . With all this water–and lunar Scorpionic water, at that–to wade through, we may feel “stuck in the mud” at times.  But, it will be a season of the heart, and a season of deep creativity.  Hopefully, a season of healing (Chiron in Pisces at the top of the chart), of rebirth (Scorpio moon) and of new, fresh optimism (Jupiter rising).  It might be a long haul (Pluto in Capricorn on the descendant–phew!), but we will have the ones that we love close by, to help us, and to work through things with us (Mars/Vesta and Ceres with the Node Node at the bottom of the chart).  And, hopefully, we can keep that Aries optimism alive, and we can trust ourselves to keep steering that ship forward, towards our dreams.  Hopefully, we can embrace the creative promise (Lilith in Leo in the 1st) and take the risk to bare our hearts and to share our vision with those that we love (Venus in Aquarius in the 8th).