“What do you think she’s hiding?” I asked.
“A secret identity of some kind?”

“Could be,” he replied.
“But I think it’s a plot.  She’s trying to undermine us.  She’s waiting for our weaknesses to become apparent, so she can pounce on them.”

“Could be,” I replied, and sat down on the bench, motioning for him to join me.
“But really, I suspect she’s just being herself.
And who she is is different than us.
We’re like different breeds of animal, intermingling.
We’re like a neon sunset, exploding from the Creator’s off-kilter box of colors.
We’re not meant to be the same.
And her being her, being different, really has nothing to do with us.”

“If you say so. . .”
He looked off across the lake, and was silent for a long time.
It looked like his brain had grabbed hold of something that he wasn’t at all prepared to let go of.  He was prepared only to devoured it, to rip it into shreds.

“You know,” he said, “when I think about it, you’re kind of funny that way too.”
He looked right at me now, and his face was soft on the outside, but steely underneath.
“You don’t really have any interest in making people comfortable, do you?”

“I guess not,” I admitted, turning away.
“But it’s not about that.  It’s not about making people feel uncomfortable.”

“It’s about opening their eyes.  And helping them to see things differently.”

“The point is. . . She’s not you.  She walks to her own beat.  And that’s fine for her to have her own drummer.
Just like its fine for you to be all Mars in Cancer, and to care about the tribe, and to plunge yourself into taking care of all of us.
I appreciate that.  I think it’s a gift, and a service.  But you have to let us breathe sometimes too.  You have to let us be ourselves, and not take it personally.”

He nodded.  I could still feel the steeliness underneath, but he was melting, a bit.
“Fair enough.  I don’t want to be a dictator, or tell people how to be.  I’m just not sure who I can trust sometimes.”

He looked up, and we met eyes.  We both breathed deeply.  I felt the tingle, again. 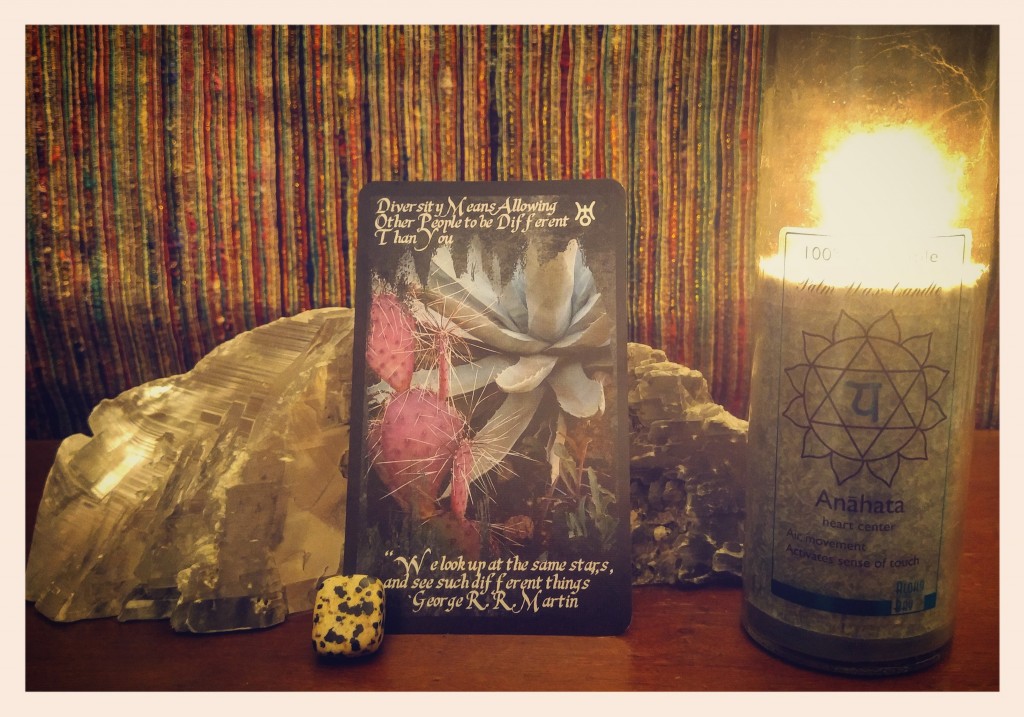 Writing inspired by this card, from the Poet’s Oracle

2 thoughts on “We are all different hearts, beating as One (inspired writing)”