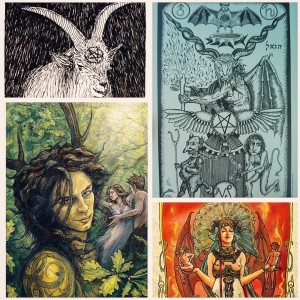 My tarot card for today, pulled from the Hermetic Tarot (upper right), is the Devil.  It’s also the first “card of the day” that I’ve pulled from this deck (since I just received it yesterday!).
I must admit–
I’ve never really resonated with the tarot archetype of the Devil.  At least, not in the way that it’s been traditionally interpreted.  Maybe that’s because I feel like the Devil has been trivialized, made into a caricature, turned into the catch-all reason that we misbehave, that we are enslaved.
And I get that.  We DO give our power over, sometimes (oftentimes).  We DO get caught up in the strong impulse, in behaving in ways that we may later regret.  That’s true.
But there’s another side of “the Devil”.  There’s the side that doesn’t get depicted in the tarot cards.  That’s Lucifer, the light-bringer.  That’s the wisdom-bringer that doesn’t buy into the status-quo, that doesn’t believe that the way to truth is through a straight and narrow path.
What if the goal were not to be a “good girl” or “good boy”?  What if the goal was not to be held in the high esteem of others?  What if the goal was to be truthful, and to learn, and to open your heart to the light?  And what if you never rejected the shadow, but neither did you sucuumb to it?  What if you felt that too, and embraced it into light being-ness?
That, to me, would be the value of tango-ing with the Devil, and gathering the light of Lucifer–simply, finding that unadulterated light within your own being.