I wound up my summer by teaching a 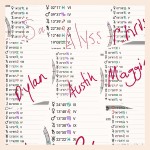 A montage of details from the kids’ charts!

morning music camp this week–vocal & some keyboards–to 11 children, ages 7 to 10.  They performed three choreographed songs, with solos throughout, for their parents: “Uptown Funk”, “The Fox” and “Revolting Children” from the musical “Matilda” (which they especially enjoyed!).  I could tell that the parents were super impressed by their performance, and I was proud of them too!

After the camp ended, I reflected privately on my experience with the kids.  (I will miss them!)  They were a vibrant group and, though we had our ups and downs, they banded together to create an amazing performance.

I am fascinated by the interplay between group and personal dynamics, and I often study astrology charts for this reason.  (I also make a point to “collect” the kids’ birthdates on the first day of class. 😉)

I thought about the qualities that stood out to me about each child, and then noticed how that manifested in their astrology charts.  For example:

* Three of the kids were very skilled at making appeals to me and the other kids, in order to generate and promote their ideas.  All three have Jupiter dignified in Sagittarius.

* One girl, Ryan, was an intuitive dancer, but had fluctuating moods and levels of engagement.  She has a Libra stellium of Venus (dignified)/Mars/Sun and the Moon in Cancer.

*Christopher, the youngest, was constantly singing and moving, but didn’t always want to move with our group agenda.  He has Venus/Mars in Scorpio, Moon oppose Mercury, and Sun oppose Eris.

*Alyssa, an Aquarius, was very collaborative and social, but also was very helpful to me.  And, she didn’t mind directing the other kids.  She has Mercury oppose Saturn (also reflected in some rhythm issues), Mars in Capricorn and Venus conjunct my ascendant.

I could go on. . . 😉  Astrology is such a fascinating tool for understanding people of all ages, and also very illuminating of interpersonal & group dynamics!