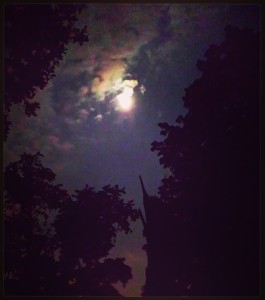 Her head wasn’t quiet enough yet.
She needed to wait until the stars came out,
Until she could feed on moonlight and bask in the cool inspiration of Night.

“When will he come back?”
She wondered.
Her heart ached for his touch,
For the gentle caress of his fingers down her spine.
His voice whispering in her ear–
It didn’t even matter what he said.

But he wasn’t coming back.
He had made that clear.
The Night had whisked him away,
In the form of a Gothic siren with dark purple lipstick and killer hypnotic dance moves.

No matter.
He could have her.
It wasn’t serious anyway, and she was just as enchanted with the Moon as he was with his siren.
She had begun following the cycles,
And planting seeds for her new beginning.
Any day now.
She could feel the earth ripening with potential,
Pulling her into its dance of the seasons.

She dropped her cloak,
And let the light of the full moon envelop her–
Cascades of stars falling down her back,
Into a glowing pool of light at her feet.

This was her home, now.
Here with the stars, and the moon,
And the pool of ancestral wisdom.
No man was needed,
No other voice–