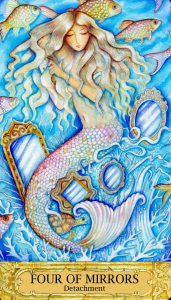 Illustration from the Chrysalis Tarot

From the voice of a shape-shifting Mermaid:

“Somehow, the world doesn’t feel like ‘enough’.
My experience doesn’t feel satisfying.
I don’t know what it is, exactly.
Maybe it’s the fact that no one knows how to match me.

When I’ve grown tired of swimming with my kind–
they’re beautiful, really, but a little too consumed with their own beauty–
I’ve even tried playing with other forms.
I’ve flitted around with the fairies.
I’ve swam with the dolphins.
I’ve basked in the sun, with the seals.

But they were all the same, even with their different languages.
They were all too laid back.
They all were consumed with the moment–
Unreflectively happy, and carefree.

I guess I’m a more melancholy creature.
My mind, at least, swims in deeper waters.
And yet, I want to splash around on the surface–
That’s where the life is!

So, I’m not sure where to go next–
Who to become, who to hang out with.
For now, I’ll stay here, in suspension,
Until the next wave of inspiration comes along.”